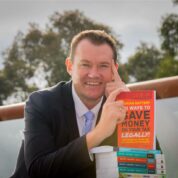 Best known as Mr Taxman, Dr Adrian Raftery is the best-selling author of 101 Ways to Save Money on Your Tax – Legally! (now in its 10th edition) and is widely sought by the media for his views on tax, superannuation and financial issues. He runs an award-winning accounting practice in Melbourne after learning his craft originally at Deloitte and Pannell Kerr Forster. Adrian spent a decade in academia and was an Associate Professor at Deakin University as the course director for their financial planning programs and was the inaugural director of Professional & Executive Education (Domestic) at the Deakin Business School. He is the former chair of the Association of Independently Owned Financial Professionals (AIOFP) and of the Financial Planning Academics Forum (FPAF) and has had a number of research articles on audit, tax and superannuation published in the world’s top academic journals.

As a long-time board member of Bears of Hope Pregnancy & Infant Loss Support Inc., Adrian says that losing ~Sophie~ was the toughest experience in in his life, even greater than losing his best friend (his father) just two years earlier.

“Just as there is no book on how to become a father, there is absolutely no book on what to do when you lose your daughter. Life is full of defining moments – those moments that you remember forever – and when we received their Bear of Hope it was a turning point in our grieving process. Despite people telling you to move on, life still sucks and losing ~Sophie~ hurts every single day. The only things that change is that you learn to cope and come to the realisation that life is too short and precious.“

Adrian has individually raised in excess of $100,000 over the past decade from running marathons, growing his beard to trekking Kokoda.

“We told our little girl that we would make a difference and are glad that our part in this program may help other families who receive a Bear of Hope named in her honour. We have achieved so much in the last decade but have so much still to achieve.”