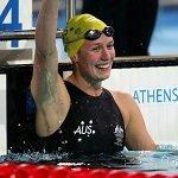 I met Amanda at a function I attended and was in awe of the passion that she showed when talking about Bears of Hope and the wonderful services they offer to families who have experienced the loss of a child.

Being a mum now I could not begin to imagine, and as most parents I don¹t even like to think about, the pain and sorrow a parent would feel of having their precious little bundle not go home with them from the hospital. I have had family and friends experience that pain.

Now I have two children, Emme is the eldest at almost 3 and then Charlie is 8 months. In between the two children I had two miscarriages in a row but then the next month I fell pregnant with Charlie and he stuck for lack of a better word. I have a very positive view of my experiences, being that if I didn’t go through those couple of months in 2011/12 I wouldn’t have the family I do now. However, for others I understand it can be very difficult, as everyone¹s story is different and an organisation like Bears of Hope is that support that parents may need and want. 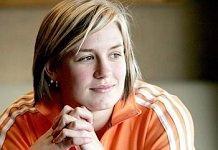 For many, the Athens Olympics will be fondly remembered as the Olympics that announced Jodie Henry to the world. Australia’s new Queen of the pool smashed three world records on her way to winning three gold medals.
The talented freestyler rose to prominence in 2002. After gaining confidence and form against some of the world’s best on the European Mare Nostrum Tour, Henry landed three gold and one silver medal at the Manchester Commonwealth Games. Her haul included a role in the team that broke the Commonwealth Record in the 4 x 100m Freestyle Relay.
In 2003 she was named the Speedo Female Sprint Freestyle Swimmer of the Year.
After producing personal bests at the Telstra Olympic Team Trials in the 50, 100 and 200-metre freestyle, Henry ventured to Athens with victory in mind. On Day 1, Henry produced a withering finish to give Australia Gold in the Women’s 4 x 100 metre Freestyle Relay and ownership of the World Record. The ever-smiling Henry then broke the World Record in her semi-final of the 100 metre Freestyle en route to her first individual Olympic Gold medal – Australia’s first in this event since Dawn Fraser at the 1964 Tokyo Games.
Saving perhaps the best for last, Henry careered away in the anchor leg to secure Australia’s win in the 4 x 100 metre Medley Relay, again in a new World Record time. Since Athens, Henry has affirmed her world number one ranking with victory in the 100m freestyle at the 2005 World Championships in Montreal.
In 2006, Henry showed her class at the Commonwealth Games in Melbourne by winning gold in the 4x100m Freestyle and two individual silver medals in the 50m and 100m Freestyle.
Henry competed in her second World Championships in Melbourne in 2007 where she produced a phenomenal final leg in the women’s 4 x 100m to steer Australia to the gold medal. 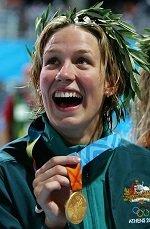 Jodie Henry has hung up her goggles and is currently enjoying life in Brisbane. She has recently married her partner, former Brisbane Lions star Tim Notting in a beautiful ceremony on a beach in Bali, and is the proud mother of two gorgeous children.